In a World of Heroes be the Purrfect Villainess

This is not about comic books, or superheroes, or even villains, really.

This is about Catwoman.

This is about being just a little bad, about being sexy and funny, and not taking yourself too seriously. Or: What I learned from Eartha Kitt.

There was something about her voice. The low, intimate timbre with the sharp delivery. The way she rolled those r’s. Purrrrfect.

Same Bat time, same Bat channel. Early morning reruns of Adam West and Burt Ward ZAM!ing and POW!ing their way through the villains of Gotham were my first exposure to superheroes. There was always something in Batman’s eyes that let you in on the secret. Something cheeky and conspiratorial, though at five I couldn’t have explained that.

At five I just wanted to marry him when I grew up. Ahem.

Something else I couldn’t have described until years later was that Batman’s world was a boy’s world. Wealthy, charming Bruce Wayne, strong, clever Batman, reliably naughty, comical villains, and a roll-call of women I barely recall, all designed to satisfy the boys. Even Julie Newmar and Lee Meriwether’s feline glamour seemed to complement Batman more than vex him. 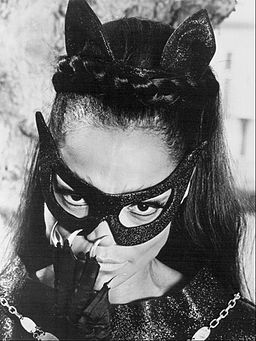 And then there was Eartha Kitt.

A third thing a five-year old can’t articulate: that woman was sexy as hell, but she was so much more than a packaged reflection of male attention. She was deliberately provocative. She owned the scene and her place in it. When she purred, I listened. She made being a bad girl look awfully powerful, even when the situation was completely ridiculous.

There’s a brilliant moment in which she pulls up alongside the Joker attempting to look innocent walking down the streets of Gotham. She’s driving the most preposterous car imaginable, complete with a tail, eyes, cat ear wheel wells and a convertible bubble.

In the ensuing 30 seconds or so, she manages to be saucy, snarky, and completely in possession of how goofy the whole thing is.

She transcended the camp of the show even while she was low-slung belted-hips deep in it. She didn’t need the Joker–or Batman–to shine, but they sure were fun to toy with.

I think I looked for Eartha Kitt’s Catwoman in every heroine, every anti-heroine, every villainess I read or watched after that. She set a strangely high bar for such an unrepentantly silly adaptation of the Batman story. In searching for that wonderful mix of humor, sex appeal, and sass (easier to articulate as you get older), I began to gravitate towards villains and bad girls—not only in comics, but in other fandoms too. Forget about blondes and their fun, bad girls had more power.

I am, for the record, the farthest thing from a bad girl, except that I write romance. (Just ask my son. He will tell you his mom writes inappropriate books). I still haven’t forgotten Eartha Kitt; her voice is in my ear anytime I write a strong, provocative woman.

She and Catwoman opened the door for me to tap into the bad girl under the surface, but also to find the heroines I needed. The ones with self-awareness, humor, sass, power, and some rebel bad girl in them.

Maybe this is about superheroes after all.

Cameron Garriepy doesn’t always write about Eartha Kitt, but when she does, it’s for Jeremy Flagg. Cameron is the author of Damselfly Inn, the first novel in the Thornton Vermont romance series, whose sequel Sweet Pease is coming in 2017. More about Cameron and her writing can be found on her author site.