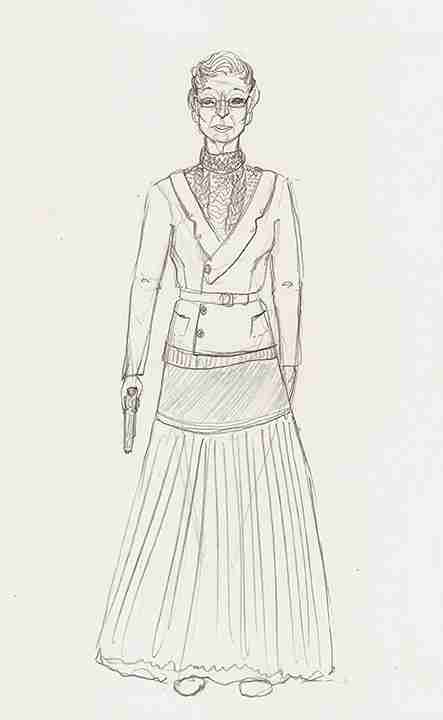 Suburban Zombie High
Mrs. V
Mrs. V plays the part of the sarcastic, witty, wise sage. She is somewhat of a recluse and hides amongst the stacks of her library and seldom is seen throughout the rest of the school. She is the hybrid of traditional Dewey Decimal wielding and modern digital database searching prowess. Her appearance leads people to believe she is a warm and inviting individual but its the myriad of contradictions that surprise often surprise the students that makes her unique. This librarian’s checkered past is seen throughout the book from researching term papers to wielding pistols, she’s not a woman to be trifled with.

The character of Mrs. V is based on two primary sources, both of them librarians. My first job took place at a school where my classroom was adjacent to the library. When I would want to get away from work or spend my lunches writing, I would escape to the library. The woman who ran it ruled with a smile and an iron fist. She had an aura of silence that followed her through the library. Where she travelled, the students would quite down in record time. She is also the name of the character, lovingly named, Mrs. V.

Mrs. V. is an interesting woman who had a past filled with adventure that made me think that this woman was capable of anything. When I discovered I needed an adult protagonist, I came up with a theory that if a zombie apocalypse occurred, she would have a gun and days worth of ammo. She was a card carrying member of the NRA and it only made sense that she would save us all. I also have theories that she was a member of the circus, drove race cars and in a past life, led a revolution in a third world country. If I was to find her on Facebook and see her wielding a semi-automatic and raising a flag on demolished government leader’s doorstep, I would not be surprised. I would then quickly like that photo.

The second woman that Mrs. V. is based on is my mother. Perhaps the largest reason the librarian didn’t get eaten for plot convenience was the constant threats from my mother. Growing up, my mother was the woman who would constantly shove source material under my nose and tell me, “Make sure your bibliography is properly spaced.” She would also be seen in a blouse and what I think of as a hippy, flowing skirt. In my head Mrs. V. is always wearing one of those skirts. Her love of databases and ability to wield Google-Fu like a weapon is also a constant thing with my mother. She will double check your story to make sure it doesn’t show up on Snopes.com, and if it does, prepare to be scolded.

The best part of this story is that the character of Mrs. V was truly born when the two librarians met. My mother came to support the students at the school I was working at and the single person I felt she needed to meet was her librarian counterpart. They bonded and talked periodicals and library setups in such rapid manner that to this day I’m convinced that librarians learn a secret language that can only be deciphered by mastering the Dewey Decimal System. The moment they shook hands I realized that I had the perfect librarian. I put a gun in her hand and a database within easy reach and I knew I had a star character to fight off the zombie hordes.