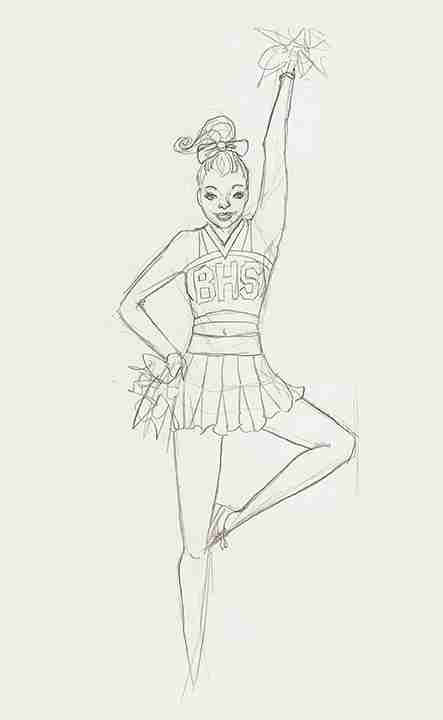 Olivia is the head of the cheerocracy and she rules without question. The only thing more annoying than her beauty is her obsession with telling people how beautiful she is. She currently is the cheerleader of one of the worst football teams in the state. She believes that she singlehandedly rules the school based on the assumption that all cheerleaders are born leaders. She lacks all book smarts and believes that her looks will land her a rich sugar daddy. What she lacks in book smarts she makes up for in scathing remarks, witty remarks, and condescension. One time, she made her Italian teacher cry by giving the stout woman such a tongue lashing about her wearing a brown belt with black shoes. The teacher relocated to another school. The only thing Olivia loves more than herself is her punching bags Min & Cadence.

Olivia is based on several cheerleaders from my high school. The cheerleaders on our “A” team were all the pretty blond girls, but despite the misleading stereotype, they were class leaders, exceptional academics and benevolent to a fault. They didn’t wear their uniforms around school like a pervert’s fantasy nor did they ever practice beyond the confines of their after school practice schedules. They may have been ditzy, but it was a fun loving trait.

Now, onto some of the “B” team. Some of these girls held the bitterness of being second string a bit too close to their hearts. They were were like vipers, venomous and always ready to pounce. They believed they were the best thing to walk the halls of my school, and I never fully understood why. I applauded their confidence, but they looked down to the rest of the unworthy population like they were better than their junior varsity status. Now, I can’t deny their talent, they were good at what they did. But during their games, which were largely unattended, their cheers were so poorly written that I couldn’t help but laugh as they attempted to boost morale.