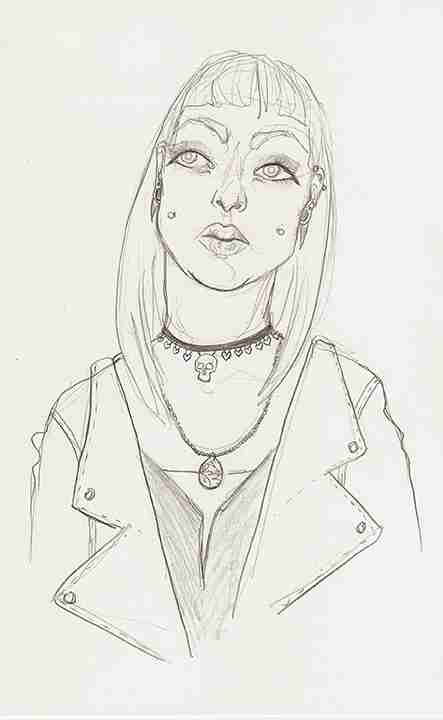 Suburban Zombie High
Cadence Winters
Cadence is the brooding art student. Her focus in life is on getting into a prestigious unnamed art school. Her goth appearance makes her a bit of an outsider and an advocate for the disenfranchised. She obsesses about her portfolio and the missing piece that will help elevate her from mere-art-student to goddess of the art world. She is the only person who has heard of zombies prior to the apocalypse.

Cadence draws her origins from more real-life people than any other character I’ve written. Her name, Cadence, is based on a girl I knew in college who would explain, “My parents were hippies, they named me Cadence because I changed the rhythm of their lives.” She was a hippy herself, but I always thought it’d be amusing if, despite her hippy upbringing she turned out to be hardcore goth.

Her obsession with art is partially self-inspired. However, this is where I decided to draw upon my students who are desperately seeking acceptance of art colleges. At some point, academics fade away and they become zombies themselves, producing uncanny amounts of work. They always seem to strive telling their inner struggle, which is pretty much identical for all seventeen-year-olds. They never seem to notice the irony that in their quest to be unique they fall into the traps of predictability. If you want to see art students explode, tell them there is a shortage of Cadmium Red acrylic paint. It’s not pretty.

In the first book, her passion is for her art. Later, she becomes a writer. This mirrors my own personal journey, wanting to be a writer, then an artist and a writer again. Unlike myself, she becomes an expert and has no problem throwing down the gauntlet, flaunting her expertise like no other. I have a tendency of putting my .02 out into the aether then seeing the baffled looks on people’s faces. Cadence takes my love of shock to a new level.

While I wish I could take 100% of the credit as the artist that inspire Cadence, I can not. If I am her father, then her mother was a peer from my high school. She was a modest artist who enjoyed her victories far more quietly. It wasn’t her defining characteristic, but it was one of the many things that made her an art superstar. She was the sensible one of my friends. As I would tell wild and outlandish stories, she would roll her eyes at the fibbing. While the rest of us might devise a horribly complicated method of building a bridge over a small brook, she would be the one to suggest just stepping over it. I have often wondered why she didn’t throw her hands in the arm and exclaim, “I’m surrounded by idiots.” This question gave birth to Cadence as we know her.